“I am a living witness of the stars disappearing,” says Sergio Emilio Montúfar Codoñer, a passionate Delegate of the International Dark-Sky Association in Guatemala. An amateur astronomer from a young age, Montúfar started learning about stars and planets from books given to him by his family, which inspired him to lay on his rooftop and gaze into the vast universe. As he learned more about the night sky, he started to notice that stars were disappearing but didn’t realize it was because of light pollution until he got older.

In his late 20s, with an admiration for the night sky, Montúfar decided to pursue an astronomy certificate at a local university in Guatemala. With a borrowed camera, he started creating images of the night sky and discovered his passion for astrophotography. He was shocked by what he saw – there were far more stars in the sky than he was able to see with the naked eye. Impressed with the results from his photos, he started to consider how he could put this newfound talent to use.

During the 2012 transit of Venus, Guatemala hosted a special meeting of the Congress for Archeoastronomy. As a self-described “loco for astronomy”, Montúfar was selected to participate in the meeting, where the group toured various Maya sites throughout Guatemala. It was a life changing experience. For the first time, he was exposed to the archeoastronomy of the Maya and his country and was blown away by the rich history.

Photographing dark skies at ancient Maya sites “woke an identity in me,” says Montúfar. He realized that the people of Guatemala have an amazing history to tell, deeply rooted in science and astronomy, but that the Southern Hemisphere is often left out of conversations about the field. “There is a huge gap in science,” he says, and has since “changed his life for astronomy” to bridge it. Inspired to learn more about astronomy in Latin America, Montúfar decided to study scientific astronomy in Argentina and was ultimately hired as an astrophotographer at Planetario Ciudad de la Plata. Through his research at the planetarium, Montúfar learned that astrophotography was more than just pictures of the stars. It was a tool for educating people about the universe, astronomy, and the threat of light pollution. Through astrophotography, Montúfar realized he could combine his love of art with his interest in science to tell stories of astronomy and culture in Latin America. With this sharpened tool, fresh inspiration, and advanced knowledge, he started working to preserve dark skies in Argentina.

Montúfar began meeting with politicians about light pollution, gave lectures about dark skies, and hosted astrophotography workshops. In conversations about astronomy, he noticed stark differences between city dwellers and people from rural areas. Those who had access to true dark skies had a more complex understanding about their place in the universe and had more profound questions about life. It was also during his time in Argentina that he learned more about the dark sky movement and connected with the International Dark-Sky Association. After his experience in Argentina, Montúfar decided to bring dark sky conservation back to his home country of Guatemala.

In Guatemala, he met with leaders of the Maya community and learned more deeply about their worldview and culture. He learned that in their spiritual ceremonies, Maya timekeepers often invoked the stars. Montúfar saw an opportunity to merge Guatemala’s past and with the country’s present through astronomy and conservation. Montúfar says, “It is important to tell people who the Maya were and are.”

He began traveling around Guatemala to document Maya archeological sites and sacred places under dark starry skies, and ultimately produced an exhibit titled “Estrellas Ancestrales” (Ancestral Stars). The twenty-two images in the show align the sacred sites to the stars, introducing people to astronomy and Maya culture. According to Montúfar, “The Maya living culture has a very important message. They are still timekeepers and they are also astronomers. It’s a different science based on observation of nature.” 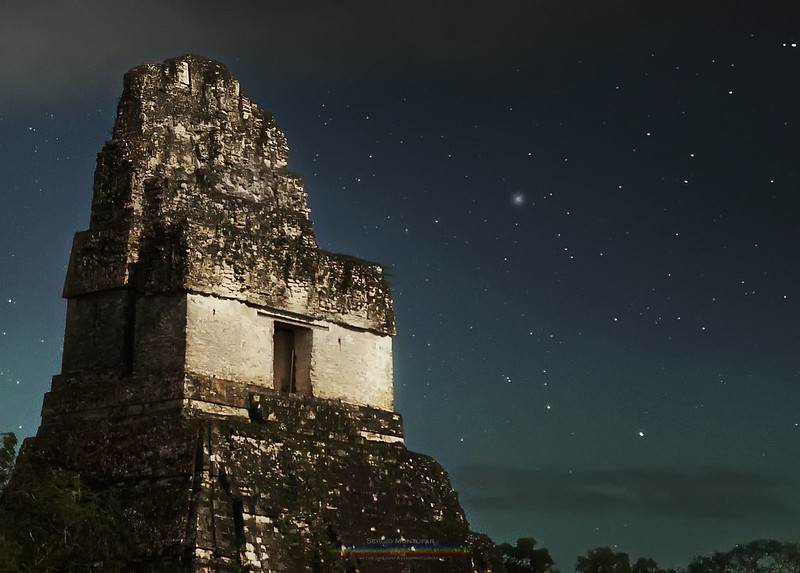 Along with documenting the living heritage of the Maya, Montúfar is also very active in preserving dark skies for the future. He wants people to be proud of being Guatemalan and sees many opportunities for bringing tourism to the country to see the nation’s unique heritage sites and pristine night skies. His goal is to prove that Latin America can be a leader in dark sky conservation.

As part of this mission, Montúfar is currently working to get International Dark Sky Place designation for three archeological sites in Guatemala: Takalik Abaj, El Mirador, and Tikal. Among his challenges in the process, he is finding it difficult for large institutions to fully understand the vision. To gain their support, Montúfar reminds these groups that they can be pioneers for dark sky conservation in Guatemala. They will play an important role in securing a better future for the country and promoting natural and cultural conservation.

Montúfar has already had success with this angle. Last fall, he organized a lights-out event, Antigua Estelar, in Antigua Guatemala, a UNESCO World Heritage Site. In collaboration with the Antigua Viva cultural program, Montúfar arranged to have the lights on three blocks of the historic Calle del Arco switched off from 6pm-10pm. When he approached the general manager of the electric company with the idea, his response was “You’re crazy…Let’s do it!”

Montúfar went door-to-door to local businesses asking them to participate in the blackout as well. All businesses agreed to participate, excited to do their part. Storytellers, astronomers, educators, performers, and photographers also provided activities and over 2,000 people attended. Despite overcast weather, Montúfar used the opportunity to teach people about light pollution and its impact on the ecosystem and human health. The response was overwhelmingly positive. Montúfar is excited to run the event again this year in late November and hope this will create a domino effect across the country for dark sky conservation.

Montúfar says that critics often ask him, “How are your stars useful? You cannot do anything with them.” He says that it is very difficult to convince people to conserve something that they have never seen. With his knowledge of astronomy, astrophotography skills, and talent for storytelling, Montúfar is dedicated to showing people—in beautiful, panoramic shots—how important the stars are to cultural heritage and their identity as Guatemalans.